I wasn't sure if the animated gif would show, but it looks OK. I took out some frames and re-uploaded it, so it plays at a better speed (I also scaled it down a lot - the original is at HD resolution). The orange background is a neutral flat colour that I can 'key' out later - replacing it with transparency. I used orange so that any fringing left by the matte process will suit the scene (battlefield at dawn).

The 3D render has a shadow too that I can use for the scene if I wish. This finished sequence will now be taken back into the 3D software to be placed on a flat card in 3D space and animated through a scene. I can pull focus and add lighting effects to it, to embed it with the rest of the 2D/3D elements.
Posted by Gary Myers at 10:00 PM No comments:

My CG soldier is rigged and ready for animation. I've started on a basic walk cycle - a weary march. I'll add a rifle and produce a cycle for use when the infantry company is following their lead tanks, clearing/flattening the wire across no man's land.


I'll output this and future animations as single frames, bring them into my animation software and use them as reference when drawing. This procedure is called rotoscope and is commonly associated with live-action footage used as a basis for animation, or when animating a moving matte to remove/add elements to film.
Posted by Gary Myers at 1:07 PM No comments:

Along with all the CGI tools and computer jiggery pokery, I'll occasionally be relying on the old faithful animation disc. This is what I trained with, and it's always good to go back and really get a feel for keying out a good sequence. 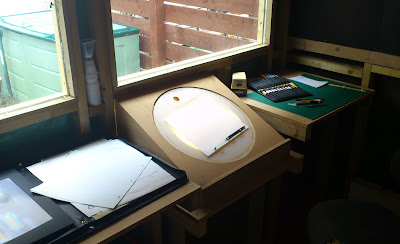