I'm a big fan of tanks, as my family will testify. I have several books on the subject of armoured vehicles and mobile artillery. One of  my favourite 'rhomboid' design vehicles is the british Mark IV, which saw action in the battle of Cambrai on November 20, 1917. 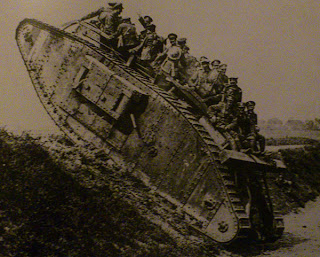 This is the kind of vehicle mentioned in Conan-Doyle's account, and would have featured heavily in my grandad's memories of that battle, lumbering on at a stately 3.7 MPH. Somehow I'm going to recreate these steel beasts for 'Gilbert's War'.
Posted by Gary Myers at 8:17 PM